It was two in the morning and I was blearily making my way to the emergency department. Walking down the fluorescent, basement hall I heard a shrill, weak cry. I turned the corner and was met by an empty, adult-sized gurney surrounded by two nurses, an aide, and two transport techs. Stopping to let them pass I realized that the rumpled bedding in the center of the bed actually swaddled a small babe, too young to sit up on her own. Immediately my chest became heavy and breathing difficult. I found myself in the nutrition closet, crying and trying to compose myself before continuing on to admit the patient I had come down to see.

Pre-Hannah, I was not an emotional person. However, some remarkable combination of hormones and five months of parenting has tenderized me. Overall, I think this has been good. Throughout the gospels we read of Jesus having compassion on the people who were as sheep without a shepherd. Of course, I’m not sure if Jesus would have teared up over shampoo commercials and probably would have made it more than two seconds into the Sinfony of Handel’s Messiah…

The first time we clipped Hannah’s nails and accidentally took off a little flesh, I cried. For more than an hour. And felt physically ill for days. That night at work, I did not let myself think of the sick baby girl until my shift was over as I doubted the sobbing would be much comfort to my patients.

This Christmas we have experienced a new understanding of what it meant for God to become man. It is hard to grasp that the Living God would make Himself as helpless and vulnerable as our Hannah, whose voluntary actions almost six months into life make up an embarrassingly short list which consists mostly of making or not making noise.

My gut twists when Hannah face plants into soft bedding after she’s been sitting up for 10-20 seconds. I cannot imagine sending my child to face mockery, torture, and death. And to do so knowing that at the moment when that child needed me the most—when Christ was on the cross bearing the sins of the world—we would be utterly separated.
This Christmas I hope that you all join Clark and me in praising God for this remarkable gift. That He sent His Son to be our example and to give Himself as the perfect, redemptive sacrifice.

For to us a child is born, to us a son is given. And the government shall be upon his shoulder. And his name shall be called Wonderful Counselor, Almighty God, Everlasting Father, Prince of Peace. 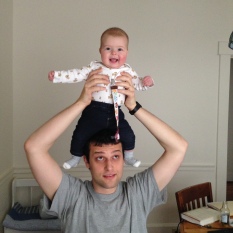 2 thoughts on “Fullness of God in Helpless Babe…”

A TASTE OF TENWEK