Our brother-in-law Zach Davis shares about his time at the AGC Baby Centre near Nakuru where he and Clark’s sister Emma have been living and working since January. Our entire Kenya field has been blessed as Emma serves in the WGM finance office and the Baby Centre has been blessed by the sweat, muscle, and cuddles with which Zach has served. 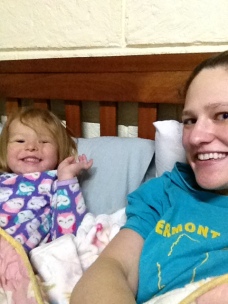 Hannah has also enjoyed extra time with her Aunt!

I (Zach) have been a little lax in sharing news from our time here in Kenya.

As we round the corner into our last month here, I have the advantage of hindsight as I share with you moments that have stood out to me as particularly poignant. In the coming weeks, I’d like to bring to you a handful of vignettes that I will carry home with me as touchstones of our time here.

This first, unsurprisingly, is nature related. 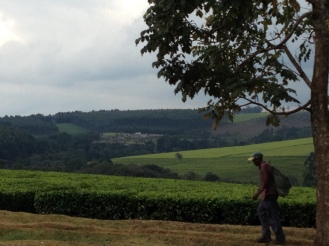 Beautiful landscape on the road between Nakuru and Tenwek Hospital

The Baby Centre is located in an area that is suburban in the classic sense. Twenty minutes from town, it is separated by swathes of countryside. The village of Ngata itself is not very populous. This location means our area is teeming with a great number and diversity of birds.

I am told that Kenya—a country the size of Texas—has greater avian diversity than all of North America. While I could go on about the egrets, lovebirds, ultramarine starlings, and finches of all colors, the birds that have most impressed me are the swallows. 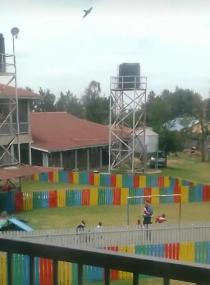 Zach playing with the kids–note the swallow overhead!

Swallows build their nests out of mud and prefer to locate their nests on cliffs and other rocky outcrops. The Baby Centre’s high, rough-hewn exterior provides as an ideal spot for nesting. In walking around the compound, I have counted no less than a dozen daubed hollows in which “even the sparrow finds a home, and the swallow a nest for herself, where she may lay her young” (Psalm 84:3). One of these is located directly above the doorway to Wing C, the area for ages two-and-a-half and up.

For weeks, I watched as the female brooded over her clutch, being fed by her husband, and later witnessed them both take flight to provide for their pair of chicks. As I went in and out of the wing, to collect laundry, help feed the children, or just play, I was reminded of the swallows’ presence by their warning chirrups to not disturb them. 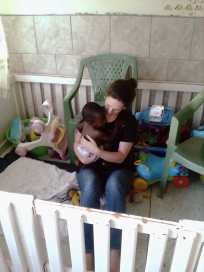 Emma giving extra snuggles to a sick Wing B child

Soon enough, I saw the chicks’ little heads poking out of the nest. It was only a matter of time before they were fledgling, exercising their fuzzy wings in the attempt to leave the nest.

One afternoon, the staff was called together for the adoption ceremony of two of our children into their forever family—the only double adoption we’ve had during our time here.

As we took our seats, my ears perked up when I heard the swallows’ call. I looked around and spotted four swallows flitting about the yard, the parents guiding their young from branch to branch. I was nearly moved to tears by the beauty of God’s timing. Only He could ordain such a moment in which both chicks and children were graduating to a new stage of their lives.

The poetic balance is unavoidable; these birds, who had benefited from the care and protection of their parents, were now leaving the nest. At the same time, our children, who hadn’t had a mother and father, were being placed into the nest within which they had belonged all along.

After that day, my heart sinks just a little bit every time I return to Wing C. With the swallows gone, it just isn’t the same.

Thankfully, this week the parents have returned and are again making laps above the yard. They hover over the children as they play, providing them with a touch of God’s lovingkindness and parental supervision–if only of the avian sort.

Praise God that we have a Father who constantly demonstrates His love and faithfulness—not just to the birds of the air, but to His dearly beloved orphans whom He covers with His wings.

One thought on “Even the Sparrow Finds a Home”

A TASTE OF TENWEK